Due to the Covid-19 pandemic, there will probably be delays in production and shipping. Thank you for understanding. 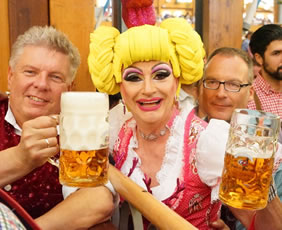 Rosa Wies’n – A Very Gay Oktoberfest in Munich! While 6 million people from around the world getting together to drink beer and sing Bavarian songs might not sound like a gay haven, for one special Sunday during the legendary Oktoberfest, it kinda is. Gay Oktoberfest is known in Germany as Rosa Wiesn-Oktoberfest, which directly translates to “Pink Meadow Oktoberfest”. While nothing bars homosexuals from attending any day or area of the festival, several events during the festival draw a largely gay, male crowd.

Roberto likes to make new friends, meet him here! There are no upcoming events at this time.

Thanks @boatinrob, gorgeous as usual! Double your

Hot pics from Americo @machin_bidule_1965, thanks

Thanks to my @dan_de_lazzari for the photo and for

Beautiful view...and even Florence is not that bad

Thanks Terry @tezexe, it's always good to see your

Love these pics of Josh @gayveganwolf, here in his

Thanks @lucabear92...feeling cosy in your new hood

Thanks @my_insta_frenchy, here wearing a vintage B