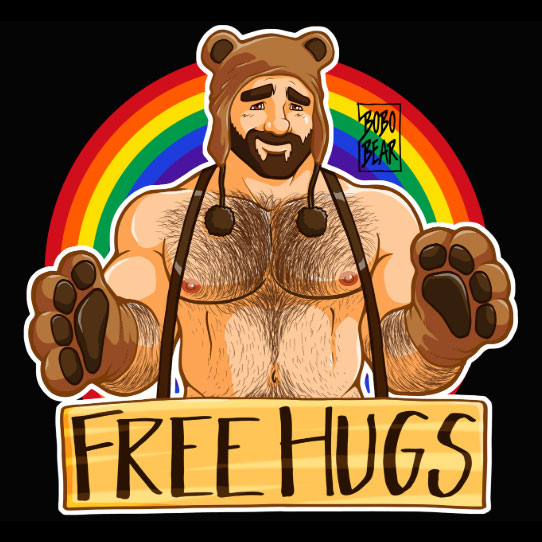 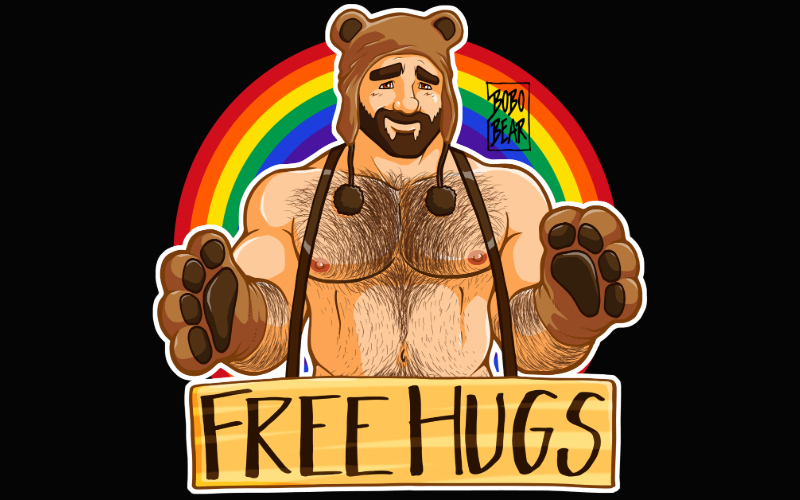 The wonderful world of Bobo Bear

Here at MeansHappy, we explore diversity, love and everything in between. Meet one of the most lovable members of our community, Adam from Bobo Bear and his equally lovable creator Roberto.

We asked Roberto what inspired his adorable creation and what’s coming up in the Bobo Bear universe.

First of all, where did the characters in the Bobo Bear Universe come from?

Honestly, my main character Adam is just my dream man. A big, goofy and sexy bear, who’s cheeky and gentle. The type of guy you can cuddle up to at night. He wasn’t based on anybody that I know or that is even real, but I have met a few guys with something in common with him!

The Bobo Bear name came from a nickname my old friends gave me about 20 years ago. It means ‘silly’ in Spanish, and that’s me totally down to a tee! So, Bobo Bear is kind of like saying ‘a silly bear’. It fits my personality perfectly but also embodies everything about the Bobo Bear Universe. Just goofy guys having fun together and sharing this idea of love, that we all aspire for.

I’ll be honest, I would so read that comic! So, following his adventures liberating the globe, how would you say Adam has developed over the years?

After I created the first sketches of Adam, thanks to the encouragement of a friend, I decided to develop the character. I depicted him in a variety of situations, and then started sharing these depictions through Instagram and then on printed t-shirts. Little by little, people just started to fall in love with Adam, and I wanted to start showing off his cheeky personality. So, I started creating some pin-up style images of him.

I always like to keep a smile on his face, so people see that he’s a good and lovable guy. He’s sexy, but not in a sleazy way – he’s the cute bundle of handsomeness that you want to take home. That’s why I think people love him so much!

I agree, I have his coffee cup on my desk every morning and his adorableness definitely brightens up my morning! So, going back, when did you start drawing? Was it always apassion of yours?

I think it always has been a passion of mine, along with anime. My mother told me I did my first doodle at age two, and even then it was of Candy Candy – an anime character. I guess I was destined to create my own universe one day!

For many years, it was an on-and-off thing though, due to a demanding job back home. Only when I moved to London and I started my new life did I gain these new aspirations. I was inspired to start drawing men. That was only four years ago – it’s still quite a recent thing for me.

So, Adam was born out of inspiration from your new life in London. Did you ever think he’d gain an entire universe of friends?

I think it was just natural to give Adam characters to interact with. He was very lonely – he’s a sociable bear by nature!

First of all, I developed the character of Ben. I wanted Adam to have a boyfriend. Ben is an adorable redhead, that suits Adam perfectly. They make such a cute couple! After Ben, I made Dave – a silver daddy type, Bobo the bear – the adorable animal, Chuck, and Mike. I wanted the Bobo bear universe to be inclusive and representational of a wide cross-section of society.

Personally, I don’t think that we should have these societal divisions. and so I wanted to make my universe, a place where all of these representations showed love. I’m hoping to expand the universe shortly, bringing in further diversity to the world of Bobo Bear. Tackling the issues of body image and race, in the process.

Adam, by far, is my ‘Mickey Mouse’ – he’s my most beloved character and people definitely want to see more of him.

Do you find that the characters are loved so much because people identify with them?

Totally! So many people come to me saying “This character is me!” or “It looks exactly like a friend of mine!” I love how identifiable my characters are! It’s the reason, that I put them in everyday situations faced by people in the LGBTQ community. I want to make them identifiable and encourage that sense of acceptance, for my audience.

Is Adam was based on yourself?

I wish he was based on me! Sometimes I use the mirror to create his facial expressions or to check some details. So, I guess I must be putting something of myself into his character. Like his little smirk or the expression in his eyes.

How do you see the universe expanding in the coming years?

I’m definitely keen on expanding the universe and adding to its diversity. I’m also keen on expanding on my existing characters. Exploring new ideas and styles, to see what creations I can come up with. I’m also in contact with manufacturers that produce caps, and am in the midst of collaborating with Daftboys on a range of fans. You must have seen some on RuPaul’s Drag Race! Safe to say, I will never be bored!

Exciting times! I could do with a new fan in my life for sure. Where can our readers find Bobo Bear, if they want an Adam of their very own?

I’m always posting on social media, so make sure to follow me there for new photos every day and useful links.

Plus, I’ll keep travelling and bringing my stall to the main bear events in Europe. You might see me soon at Berlin Motzstrassenfest in July, or Torremolinos Madbear Beach in August.

No products in the basket.